NAAR: First of all I wanted to say congratulations for Momentary Masters. To me it’s the album of someone experienced, lucid and confident. Can we define the Albert Hammond Jr of today in these words?

ALBERT HAMMOND JR: Sure, that suits very well. I couldn’t have said it better, I might steal that from you. But, with all of those things, comes the other side too. You are never just one thing, you’re never all lucid, confident. Sometimes I feel experienced and before I know it, I feel like a beginner again. Or I feel confident, and then I feel like I don’t ever wanna do it, like “should I even be doing this?”. So they both exist. But the record came from that spot.

NAAR: It gives the impression that, after almost ten years of feeling mentally captive of The Strokes, you are now a full-fledged artist, free and powerful creatively…

AHJ: I wasn’t trying. I never felt captive with The Strokes, but this definitely was to see if I could build a career for myself. To see if I could stand on my own two feet.

Sometimes I feel experienced and before I know it, I feel like a beginner again.

NAAR: So are you happy with what you’ve done?

AHJ: Yeah, I’m excited. I was already feeling super happy when I finished the record. I felt like I had come up with something, that I had accomplished something that I had always wanted to do.

NAAR: So you have this solo project that’s flourishing. And at the same time, The Strokes are still in the center of your artistic life:  you’re touring with them, many of the people who contributed to Momentary Masters have been involved in Strokes’ albums previously, like Lizzie Nanut, the art director, or Gus Oberg, who produced the album..

AHJ: Right, but I brought Lizzie. We did Angles together. And Gus, I met him on my first solo record..

NAAR: And he made The Strokes last two albums. It’s funny because I have the impression that you’re trying to keep that balance between your solo emancipation and the fact that you’re still in the Strokes’ galaxy at the same time.

AHJ: Well, you build friendships and you like people… I really liked Lizzie and her art work. I thought: “I’d like to bring her into this big machine”. And Gus and I are such close friends. I remember telling everyone I didn’t want to do it if he wasn’t a part of it, because I thought he was so special. But I knew once I said that that I’d lose a little bit of my friendship with him. Because that’s what happens anytime you bring things that you like into a thing like The Strokes. It goes away, it comes in the bigger bowl. So it’s the opposite actually, it came from things I did alone.

NAAR: What did you think of Tyranny, Julian Casablancas’ latest album? How do you feel about him being political now?

AHJ: I really liked the words. I always think he buries his vocals a little too much, especially for something like that, that seems to have so much meaning. You have to read it, you can’t really hear it. I really liked his words. It’s not my cup of tea, musically. I always liked the idea that you can express those feelings while still trying to entertain. He seems really happy about what he’s doing. I always want to keep positive stuff. He seems really happy, he got to accomplish something that he wanted, that’s all that matters really.

AHJ: I guess that’s what he always wanted to.. I guess, I don’t really know, I mean, I haven’t spoken in detail with him for a long time so it’s hard to know what’s in their heads. I’ve always had conversations with him and we’ve always spoken about interesting topics, what we feel about something. As you do with friends, if you have an idea and share the basic part of it.

I feel you have to start from scratch to build up a fan base, but it's fun.

NAAR: You shot the music video for Losing Touch in Tangiers.

AHJ: I did Tangiers, Fes and… the middle of fucking nowhere. It was a road, where there was nothing around.

NAAR: Is there a particular reason why you decided to shoot in Morocco?

AHJ: Location. We were doing the Primavera festival in Barcelona. The director was living in Barcelona and I was going to visit my parents in the south of Spain. He came with us. We were first going to shoot on the beach there. We were going to redo the whole beach thing from the Seventh Seal, the Ingmar Bergman movie. And then he said “why don’t we go to Tangiers?” We thought it was really cool and then the idea started changing and we decided to do this two-part thing. But it was just three people, shooting a video over three or four days, with no pre-production. It was pretty crazy, we were just kind of driving in a van, and then “oh, that spot looks good”. It was just one of those things that seem special. If we had been in America, the whole budget would have been flying to Tangiers.

[The Losing Touch video] was just three people, shooting a video over three or four days, with no pre-production.

NAAR: You say about this album that it was like it was your first album. When you talk about three people shooting your music video, it seems indeed like a first album.

AHJ: It is very do-it-yourself. I feel like people have this impression because the Strokes name is big. It is bigger than we actually are, success-wise. I’m just casually doing music. I feel you have to start from scratch to build up a fan base and to tour. You know, you’re touring in a van, you’re doing stuff yourself. But it’s fun, that kind of changes the music, it’s good.

NAAR: I was expecting you’d say that you’d fallen in love with Morocco and that’s a great country. Because I’m Moroccan.

AHJ: I did, I had a great time. I wanna go back, but most things I do are not romantic in that notion. It’s mostly little steps, I have bigger ideas but they need too much money to get done. I would like to make a band movie, live.

AHJ: No, no, no, like a written script, but mix it. You have the idea like you’re doing some kind of tour, but not your ordinary bus tour. I haven’t figured out all the details but it’s basically part written and part live songs. So not like Dig.

NAAR: And you would be going to Morocco and stuff!

AHJ: (laughs) Yeah, that would be great. That’s something The Strokes could do but we just don’t do that stuff: go around, go different places to play shows. I never understood why we just play the big cities. It would be fun to do eight shows in Germany, eight shows in France, and go around little towns. All these places that I had never been to and was like “why did we never play this, this is so cool”.

I would like to make a band movie [...], part written and part live songs.

NAAR: In the Losing Touch video you’re running from death. Do you feel now that you have a lead on it or not?

AHJ: (giggles) No, you never know. I was sleeping the other night and I was thinking it’s so funny how your body is so delicate, I wish I had understood that sooner. I mean it’s strong but it’s also so delicate. You never know when your heart is going to stop.. But the video wasn’t exactly my idea. The director was French and it was his idea to do that, but it did tie in with all these things. I think about it, not every second of the day, but when it pops up it’s interesting to me to realize it.

NAAR: And when you play chess with death in the Caught by my Shadow video, you lose right?

I never understood why we [The Strokes] just play the big cities.

NAAR: On your album there is a cover of Bob Dylan’s Don’t Think Twice (It’s Alright). Can you tell us why? Some people can find it too obvious.

AHJ: I know, that’s what’s funny about it. I didn’t think about it that way. It was recorded right after I did the EP, before the album. My friends do this Dylan fest, Petty fest, that kind of festivals where they cover the songs for a charity called Sweet Relief. They were doing one in Dublin, they gave me eight songs and I had to pick one. I wanted to rearrange it so I started going through the songs. On this one I happened to start having parts. Then when I recorded a rough idea of it, it didn’t sound like the song, it had its own feel to it. So when I got back home, I finished it. The record was done, it was just nice to have a little four-track sounding song in the middle, like a palate cleanser between two sides. I never play it live, it’s just an album thing. 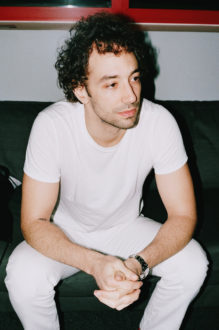 NAAR: It made me think about Christopher Owens who played three covers in 2012, of Paul Simon’s, Bob Dylan’s and Cat Stevens’ songs, like the most obvious song of every artist. In the middle of the concert, he was playing these three songs. Like you’re in a summer camp, around the fire, and someone takes the guitar.

AHJ: Maybe he was just playing them on the road, a lot of solo things happen to people that make them want to do stuff.

NAAR: There’s a great interview by Stereogum in which you talk, among other subjects, about the process in order to get sober. You explain that you forced yourself into becoming “curious again, see the world anew, in a constant effort of working on [yourself], maybe becoming a completely different self over time”. Don’t you feel like it’s probably something everybody should do right now?

AHJ: It’s funny, after you go through it and you talk about it, you start to realize that you would probably be doing something like that, or should be doing stuff like that, just as you get older because things change naturally. I really had to start from scratch. What I meant by forcing is that I couldn’t allow myself to just sit there, because then my mind would just start to spiral. And before you know it, I would just be in a terrible place and that would lead to wanting to do something. So I had to set up stuff: “from here to here, you’ll practice, from here to here, you’ll go see a movie”. Even to set up fun things, I couldn’t be spontaneous, I was like “you’re gonna see a movie, here”. It was like a schedule. It was great though. At first it was terrible but it broke a mold. I was stuck, like a broken record, so it kinda helped. I think that everything is constantly changing, so I think it’s appropriate for everyone.