NAAR: Hi Christopher, how are you? Tell me about how happy you are to be in France !

CHRISTOPHER OWENS: I have a big relationship with France, not huge but for me it’s big. I moved to France in 1990 when I was 10. Before, I was living all over Asia. Moving to France was the first time when I was around Europeans, and it was an interesting thing for a 10-year-old. Suddenly I had a friend Jean-Pierre and a girl, Sophie, who had blond hair. I lived in Orleans, where “Jeanne d’Arc” is from, then I lived outside of Paris, in the country. The whole thing was 3 years. I learned French very little, because I wasn’t part of France really. I was part of my community.. But it’s hard to explain. I was inside a lot basically. I learned a lot about the Bible though.

NAAR: First of all, I would like to talk about this incredible cover you gave to the album. When I saw it for the first time, I thought you made a parody of the ads for cults. You know: the multiethnical group with everyone smiling, the very bright and colorful tones of the pictures and this massive biblical title: A NEW TESTAMENT. Is there any secret meaning in it?

CO: I wanted the cover to be a photo of the group. As we were making it, it was obvious to me that those people were adding a lot to the sound, so I wanted to show that on the cover. And the title.. I just like it. It’s not as tricky as people think. I’ve had a lot of people asking me “does it mean this or that” but it simply means that the album should be a testimony to the artist.

NAAR: Ok, so for the cover, it’s like a football team. You took a photo before the game..

NAAR: A New Testament sounds like a very spiritual album, beginning with its name, and also with the gospel parts, and all the references there is to God we can find in it. Are you a spiritual person?

CO: I’d like to say yes. I don’t really know. It’s such a big term. I do believe in feelings very much, but I don’t have any religion or I don’t believe in ghosts or anything like that. But I’d like to think that I’m a spiritual person. I’m afraid to say yes, but yes. (laughs)

NAAR: Last time you toured for Lysandre, I remember you were maybe 6 or 7 on stage, which is very unusual now. What were the pros and cons of it?

CO: For Lysandre, I didn’t do any festivals because the music is very fragile. It’s very soft, with flutes and classical guitar, going from one song to the next.. So I didn’t want to do that at a festival, even if some of them invited me to do so. I didn’t think it was right, a loud crowd just “blaarhh” (imitating an over-active crowd). I didn’t believe that it would work. They don’t even give you a sound check at these things. But you know, having a big band and not playing festivals, it’s a disaster for the label, so maybe I would do it this time.

NAAR: In your previous show, you covered 3 songs: Don’t Think Twice, It’s Alright by Bob Dylan, The Boxer by Simon and Garfunkel and Wild World by Cat Stevens. Why did you cover these ones in particular? They could seem be pretty obvious to play, given their iconic status..

CO: I picked them initially because they are the first songs that I learned to play the guitar on. They’re very fundamental to me. That’s where I started. I thought it was a good idea to cover them live because Lysandre was a folk album, so I thought I’m showing a parallel, the influence of what I’m doing and where it’s coming from. And the last thing is that, if you go see a band of my level of success – down here in the middle (laughs) – you’re never going to see those covers. It’s like taboo. When playing them, people were like “yeah, I love that song and I haven’t seen anybody play this because I don’t go to Hard Rock Café (laughs)”. But ultimately, I just enjoy playing them, which is just why I do anything. (smiles with satisfaction)

As we were making [A New Testament], it was obvious to me that those people were adding a lot to the sound, so I wanted to show that on the cover.

NAAR: Do you believe that there could be a new trend around songwriters’ albums today? I feel that we’re in a moment when people give all the credits to producers for creating sophisticated, creative arrangements and catchy beats and less importance to the songwriting.

CO: I agree with you. Iggy Azalea for example, for all we know, she doesn’t even write her raps. I don’t know. I’m always surprised of what becomes popular. I think ‘why not’. It could be great to have some new celebration for songwriting. That could be great, but I don’t know.

NAAR: Do you believe in the emergence of characters such as Paul Simon today? A songwriter who touches all kinds of audiences with just simple and well-crafted songs?

CO: That’s what I’m hoping for all the time. Not only Paul Simon, but I want the new Freddie Mercury, I want the new Miles Davis. Maybe I’m just admitting that I’m being nostalgic, but I don’t think so. I’m also excited by new things. For example, I think Beyoncé is once in a lifetime. We should all enjoy her as much as possible right now. If there were to be another Paul Simon, that would be fantastic. I mean, people think about him from his albums. But there’s just as much from Simon & Garfunkel. He has a HUGE catalog, that guy is kind of without parallel.

It could be great to have some new celebration for songwriting.

NAAR: So he’s the number one for you?

CO: It’s a tough thing. Maybe him or Randy Newman..

NAAR: And no Bob Dylan here?

CO: I like Bob Dylan, but I don’t have the same connection. I think he’s better at writing sorts of reports. He’s more of a journalist. “Let me tell you the story of Hurricane..”. But he also has moments when he reaches in there and grabs your heart too. I don’t know, something about Paul Simon is a little bit more melody maybe..

NAAR: There’s also another thing that’s very seducing about those guys you quoted. It’s their part of awkwardness. Paul Simon, you can laugh at his silly hair and his funny expressions, but you can also recognize his immense talent. And Randy Newman too, his voice can be hilarious..

CO: Yeah, and Freddie Mercury too. It could be easy to laugh at him, mostly in the beginning. He had big teeth and he was wearing weird outfits sometimes. You could watch the Bohemian Rhapsody video and think “wah, he’s really funny”. But his voice, we don’t have another one like it.

NAAR: I would like to talk about a song that is not in the album: it’s Brian Deneke. Were you at Amarillo when these events happened? Were you a punk too? Tell me about it.

CO: We used to all hang out at this IHOP. It’s like a diner and it stays open all night. In a town this small, all the freaks, as we called each other, from drug addicts to punks to ravers, used to hang out there, all night long. So I would hang out there too when I didn’t work. I worked at a grocery store, unloading the trucks and putting the stuff on the shelves. And that’s what I was doing the night when that happened. So the guys were in this IHOP, and those other kids came in and an altercation began between them. The night after this happened, there was a fight in the parking lot and this is when Dustin Camp, a local football star, killed Brian with his car. He didn’t only hit him, but he also backed up over him again. It was remorseless and intentional, and he didn’t go to jail, he just got probation. So the whole town was divided by this story. But it changed the minds. Before that happened, every time I walked in a store, I’m either going to get somebody who wants to beat me up, or make some names at me, or just refuses to serve me. It was extreme. For me, it’s a big part of my life.

NAAR: Among different qualities, you seem to value hard work a lot. It’s something you say in your interviews or on social networks. For example, you posted a very meaningful Jacques Brel interview about it recently. Are you a hard worker yourself or is it a quality you like to recognize in others?

CO: Like I said, when I was working at that grocery store, I was only 16. I had arrived in America for the first time. I know a lot of people who were in their twenties and who didn’t have a job. I’m not saying this makes me a better person, but I worked really hard at those times, washing dishes at the restaurant for example. I don’t look back at it and say “that sucked”. I just remember “I bought that cool Volkswagen that I wanted” or “I bought my electric guitar with that money”. I see where I’m now and I know that’s because I worked hard. I think it’s the same with an album like this. We went to the studio and we worked really hard. I think that all the greats, like Beyoncé, they take this very seriously.

NAAR: Do you think that this album will be well received by the country music audience?

CO: (Laughs) No, I don’t. I’m not expecting that. I think that there might be young people in Nashville or Austin who will like it. But I don’t think it would be selected for the country music award or something like that. I don’t think it will be played on country radios. They’re very protective about their music. They look at your background, what kind of person you are, what your values are, what your politics are. It’s a very guarded community.

NAAR: More generally, do you consider that you fit with the country music background?

NAAR: Do you think you that you defend the same values than the other country singers?

CO: Well there are a lot of them. In general, the traditional ones, yeah. Being adrift in the world, feeling alone, struggling with your personal demons. You know, there’s a song saying something like “if this whisky don’t kill me, your memory will” or like “your heart turned left but I was on the right”. These are classic country songs. It’s exactly what I’m doing now. But if you listen to Patsy Cline’s “I fall to pieces”, that’s what I’m into. 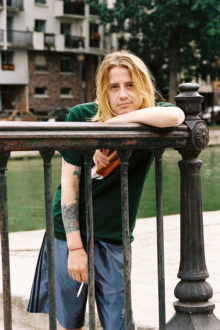 I prefer Whitney Houston’s [version of I Will Always Love You], she hit the homerun there, we all know that

NAAR: Ok, let’s see if Christopher Owens is  a true cowboy then..

NAAR: Which version of I Will Always Love You do you prefer? Dolly Parton’s or Whitney Houston’s?

CO: I prefer Whitney’s. Dolly Parton’s version supports my whole theory that country music is one of the fundamentals of the music, period. It’s one of the cornerstones. But Whitney, she hit the homerun there, we all know that.

NAAR: I remember your cover of it, it was really great. What’s your favorite Bob Dylan album ? Nashville Skyline or Blonde On Blonde ?

CO: I think I like Blonde On Blonde better.

NAAR: Really? So you’re not a true cowboy then.