NAAR: You’re such an international person, you have friends in every city. Generally people say that Finnish people just stay in their country and don’t travel much.

JAAKKO EINO KALEVI: Yes, for example, the language is so different. And then, it’s kind of like an island, because the border to Russia is so strong, you have to get a visa to go there. And then if you go anywhere else, you have to take the boat, or fly. I live in Berlin now and there is a lot of Finnish people. I have some friends here who are Finnish.

NAAR: Because you have a Finnish radar, you see all of them. Like me, I know that, I recognize Moroccan people immediately in the street.

JEK: In Berlin there are a lot of Finnish tourists but usually the reaction that Finnish people have for other Finnish people is like « OK, OK let’s just shut up » (laughing).

NAAR: In the opening song of the album, you repeat your own name, like a mantra. Is it some kind of ego-trip, you want people to sing your name? I tell you that because because I sang your name in my head during the whole week: « Jaa-kko Ei-no Ka-le-vi ».

NAAR: OK so there is some kind of ego-trip.

JEK: Mmm, yeah, maybe (laughing). Also it’s like pronouncing instructions for people. But that’s not the point of the song, the inspiration for the music came from one party in Berlin, they were playing very slow and basic music and people were dancing like in slow mo and like bending their bodies. But the album being named after me, it made sense that the first song is just repeating my name (laughing).

NAAR: You embody the vision people out of Finland have of Finnish people: cold-blooded and calm and chill. Tell me about the last time you lost your self-control?

JEK: I don’t do that that much, maybe during these times when you drink and you don’t remember stuff. But I don’t remember a specific moment. I always try to find peaceful ways, peaceful solutions. When I drive a car, you know, there is that road rage thing, but I do it as a joke. Like when you’re driving behind someone and he’s turning and says « what the fuck, what are you doing? Get out the way ».

NAAR: Louis CK has a part of his show, exactly about this, how normal people become especially vulgar and violent when they’re driving cars.

JEK: Yeah, when you should be very careful, it’s the place where you lose your temper.

The album being named after me, it made sense that the first song is just repeating my name.

NAAR: Do you have specific references that inspired your album? To me it sounds like plastic soul, the name David Bowie gave to the genre of Young Americans when he released it. He said : « It’s soul music but made by an English skinny white man, me, and I call it plastic soul ». He even played it at the Soul Train at the time.

JEK: I don’t know if I can mention any artist from that genre, Joe and Donnie Emerson, but it’s more poppy, a little bit soul. I was listening to a lot of funk and soul when I grew up. But not really related to this album, I’m just naturally funky (laughing).

NAAR: Your voice has a very David Bowie vibe in this album, in particular in the song Say. Is he an artist you listen to a lot?

JEK: Not that much but I think he’s really inspiring. The only David Bowie album I have is Low, I think that’s my favorite also. It’s kind of sketchy, in a good way, kind of experimental. It’s a beautiful album.

NAAR: You sing in Finnish a few times in the album. Is your Finnish identity something you want to highlight in your project?

JEK: I have this cape on me. Many times, when people write about me, they say « Finnish artist ». I think people don’t know that much about Finland or about Finnish music. So when there is something coming up they point out that it’s from there. The most famous acts from Finland probably are some heavy metal bands, like Nightwish and Him and The Rasmus.

NAAR: Did you listen to that stuff when you were younger? Did you have a crow on your shoulder?

JEK: (Laughing) No but I was into metal a lot. When I started to play guitar we had a metal band. Metal is a big scene but it was an even bigger back in the time. Lordi, the band that won the Eurovision made it mainstream, but we don’t take these bands seriously. But people were very proud of it because Finland had never won the Eurovision.

NAAR: Mh… And what if it wasn’t that bad not winning the Eurovision?

JEK: It’s just a funny thing to be obsessed with. We were like: « Who will we send? How can we win this? ». It’s kind of weirdly important (laughing). I actually applied once, it was in 2010. You know this song « Flexible heart », I thought it would be perfect but it didn’t get anywhere. You have to apply and then people vote for your song on a website, but it didn’t even go there.

The Eurovision is just a funny thing to be obsessed with. It’s kind of weirdly important.

NAAR: You moved to Berlin last year. How is it going there, for you?

JEK: Umm, actually, I do a lot of stuff… Even if I still don’t have Internet in my home..

NAAR: (Laughs) It was actually my next question!

JEK: Yeah, that’s bad. But I read and I watch movies. Sometimes I eat (laughing), do the dishes, take baths.. Sometimes, sleep. I like staying in my room.

NAAR: I’m talking about the Internet because I love this quote of yours from a previous interview « You can dream about this perfect, blissful life, but you can also dream about having internet. ». I think you make a point here. To what extent is the internet important in your life?

JEK: Well it makes things easier. It was really bad once. I fell into the canal and my phone broke, while it was my only way to have the internet.

NAAR: Cooool ! Is there a video of that?

JEK: No I was alone. I was on my way from a party to my place and I took a shortcut. Then I slipped and my phone broke so I didn’t have a phone and I didn’t have the Internet. Especially at this time I had to be in touch with people because of the album release. It just made things very hard. People are always on their phones, you shouldn’t spend so much time on the Internet but it makes things easier.

NAAR: I have the impression that you’re not the kind of artist that people just listen to, I think that people who like your music, also like your character, your style and your attitude in general. Is it something that you feel and how do you deal with it?

JEK: I’m not very conscious of that, how can you separate these two things.

NAAR: You know, there are music geniuses who are total assholes..

JEK: Yeah, but also their character is interesting. I don’t know, what would Guns N’ Roses be without Axl Rose being a difficult person? It wouldn’t feel so real. But of course there are some artists who don’t show their character that much. I think like The Knife, they’re pretty mysterious. 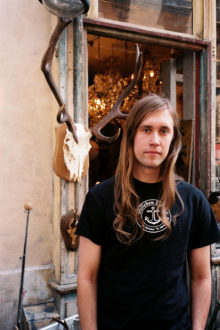 When I started to play guitar we had a metal band.

NAAR: What do you expect from this album? To be recognized, to be known..

JEK: I hope that they will make a statue of me in Helsinki or in my hometown (laughing). That they will give me a palace. And the key to the city.

NAAR: Do you consider yourself from Helsinki or from Finland ?

JEK: Whenever I go there, Helsinki feels like home. Even Jyväskylä, where I’m from, feels like home but there are not many friends living there anymore. They have moved to Helsinki.

NAAR: Maybe the mentality or the people are different? For example in France, people are very different in the North or in the South of the country. And maybe it’s the same in Finland, maybe people sometimes don’t really like each other…

NAAR: So you’re not like Axl Rose, people can invite you to dinner and you will be nice, put your napkin on and eat with your fork. Whereas Axl Rose will take a piece of chicken and be like « nom-nom ».

JEK: (Laughing) I cannot promise anything but maybe I won’t use the fork. How shocking is that!

I like everyone. I’m not prejudiced. Or maybe I am, I don’t know.