NAAR: Hi guys, how are you doing? Isn’t it hard to be on tour for people like you who love staying at home?

WYATT SHEARS: I don’t necessarily like staying at home. I think it’s nice and at the same time, this is what we got to do to make sure that the music is distributed properly. And touring can be sometimes..

WS: No, it used to be worse than it is now. We’re a little better taken care of now than we were before. We have a better van now.

NAAR: What’s the difference between touring in Europe and touring in the US?

WS: I think there are a lot of things. In Europe, people seem to appreciate more to have you. In the US, the crowds move around typically a lot. Even in Europe there are different type of crowds.

WS: It’s hard to say.. People in Paris or in London are always cool. It’s probably the most important places for our shows. I like Italy too.

FLETCHER SHEARS: Denmark. My girlfriend’s from there.

The Garden is more of a project than a straight-up band because we’re throwing up our art more than anything.

NAAR: Do you consider that you make experimental music?

WS: Yeah, The Garden is more of a project than a straight-up band because we’re throwing up our art more than anything.

FS: People treat it like a band until they come to the show. We’re not a typical band, we don’t do a proper soundcheck or this kind of shit.

NAAR: Do you think it opens doors for you or closes doors?

WS: I think it just opens because we’re open to anything. If we were just a band, it would close doors. We would say “oh we wouldn’t do that cause we’re a BAND!”. We consider ourselves really anything so we’re up for doing anything. We could write a book and it would still be The Garden, you know what I mean.

NAAR: What’s more important in The Garden project: is it humor, music or art?

WS: I think it’s a mix of a few different things. I mean it’s very sarcastic and at the same time it’s very aggressive. I like to throw a very confusing vibe where you can’t tell if this is innocent or aggressive. I’d like to feel the same way at a The Garden show that I would feel if I was going to something I’ve never seen before. I would like to feel a little bit of unexpectedness and mystery to it. I like it to be like a jungle, you know.

FS: It’s nice to go to a show and not know what’s going to happen. I mean, it’s one thing not knowing what song the band’s going to play next, but generally that’s the only mystery you have in a show. I consider that pretty boring.

NAAR: Wyatt, your dance moves remind me a lot of the ones of Nicolas Cage in Wild at Heart.  Is it an inspiration for you?

I like to throw a very confusing vibe where you can’t tell if this is innocent or aggressive.

NAAR: People say there’s always a kind twin and a mean twin. Who’s the kind one and who the mean one?

NAAR: What does being punk mean to you?

FS: We never really think about that word ever, to be honest.

WS: Being punk defines doing your own genuine thing. People refer to a lot of bands as punk nowadays but the bands that some people consider punk are just doing the same that was done back in the days. Punk has become a genre now. For me, you’re punk if you’re doing your own thing and if you’re doing something unique. There are lots of rappers or electronic artists who are punk in my opinion. It just depends on how you go about it. For me, being punk is being innovative.

NAAR: I’m gonna tell you a few names and you tell me if you think they’re punk or not. Ty Segall?

WS: He’s good at what he does but I don’t think his music’s innovative.

WS: He did something sort of punk with Yeezus and he brought that kind of music to the mainstream but he wasn’t doing anything really different because it’s been done many times before.

FS: I think for the mainstream world he did something different but for everyday life, in the big scheme of things he didn’t do anything new. Even with his design stuff, I don’t think it’s forward thinking, it’s just a different state of mind.

NAAR: Sonic The Hedgehog? He has spikes, which is very punk.

WS: Of course he is.

FS: Actually, he’s not fun to play with on Super Smash Bros.

WS: Of course! It fucks shit up sometimes. The Internet has punk parts for sure.

NAAR: What do you like the most in the Internet?

FS: Everybody can do whatever they want. No one can really stop it! Even those weird pictures of Beyonce, the President asked to take them down. They didn’t do it. They couldn’t do anything about it! 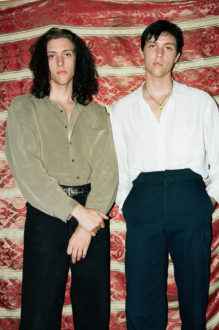 NAAR: What are your favorite websites or Facebook pages?

WS: Wikipedia and Youtube for me. We watch a lot of videos for inspiration, curiosity… and boredom.

NAAR: What would you like to be when you grow up?

WS: A fireman or a drag. No really, being successful without overworking myself and being happy. I don’t care if it’s music of something else, I just need to be happy.

We watch a lot of videos for inspiration, curiosity.. and boredom.